So I recently had an experience I never thought I’d have: I performed in a musical on 42nd Street in New York.

Why did I never think I would have this experience? Well, because even though I do sing, I am not a “musical theater actor”. I don’t read music. I can’t tap dance. I have no training in jazz hands.

And yes, I realize that lots of musical theater isn’t like that, but still, even though I love doing shows with music, I don’t think of myself being in musicals. Much less a musical theater festival.

However, Liars and Believers‘s latest project, Icarus, is not a traditional musical. It’s an “Americana songplay”. With puppets. And burlesque. A Chorus Line it is not. And while no one would ever cast me in A Chorus Line, if you want me to sing my heart out in a sad, old-time country ballad,

do a funny vaudeville voice while I puppeteer a sideshow freak named No Bones Magee, 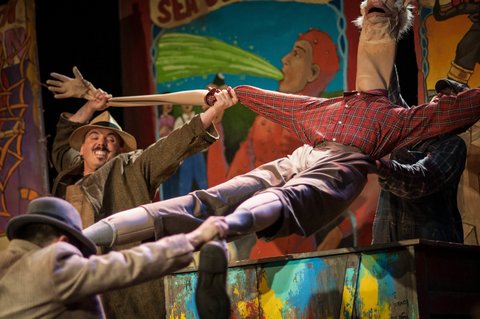 and portray a pack of wolves,

and a scared, down-on-his-luck, Depression-era vagabond, 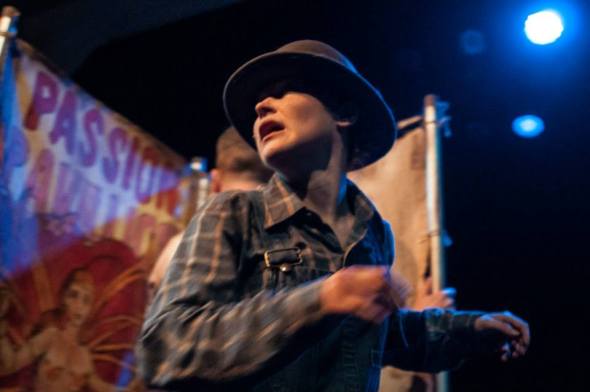 then I’m your girl, ’cause that stuff is totally my jam!

So, when we were invited to present our little show in the big city (please imagine a 1940’s radio voice saying “the big city”) for the New York Musical Theatre Festival, we found ourselves…performing a musical on 42nd Street (!), and having a great time in our week-long run.

And much to my surprise and delight (because I didn’t know that the festival would be reviewed), we received several warm reviews, including one from the New York Times (!!!), in which one my work was called out in particular:

The show’s most inspired invention is the sideshow attraction No Bones Magee, whose big number starts funny and ends twisted in more ways than one. (Veronica Barron has the cast’s best voice in this and several other roles.) It’s here, when the comedy curdles and the aesthetic choices gel, that you can see Mr. Slavick’s sardonic aims and envision “Icarus” really taking off.

At which point, all I can say is, “OMG! The New York Times mentioned me by name and said nice things!” Swoon!

We also received some festival awards: an honorable mention for the book, which is by Jason Slavick and the LAB ensemble, and an honorable mention for overall design (and our designers were seriously amazing: Faye Dupras‘s puppet design, Aaron Sherkow‘s lighting and set design, and Kendra Bell‘s costume design), We also received several other warm reviews of the show as a whole, and I was tickled to get some personal mentions as well:

The sideshow crowds [are] portrayed in the deft hands of versatile ensemble player (Veronica Barron ) by a pair of wolf puppets who catcall: “Great gams.”

One marvels at the sheer simplicity and transparence of the effects. Therein lies their magic.

There you have it, folks: this show is a heck of a lot of fun to perform, and it was a delight be so warmly received. All in all, a great experience!

A final word: Icarus may fly again, and if you don’t want to miss it next time it’s in town, join the Liars and Believers e-mail list.

So that was my summer. What took flight for you this summer?

Older: July 2013: Outside the Box Festival
Newer: Next Post